I always have difficulty in answering questions like “what’s your favorite book / band / TV show?” I don’t really have consistent favorites, just common answers that I return to, and there have definitely been times where I answered a question about a favorite band that I really didn’t mean, and just used because its something I’d said before.

I think my favorites are constantly shifting, and its really dependent on what has been recent for me, in addition to the fact that comparison among such big genres is nigh impossible. Whenever I try to pick a favorite, then, I usually just preface my answer by saying that this is my favorite right now.

However, the brief anime series FLCL (pronounced Fooly Cooly) might very well stand up as one of my all-time favorites for a television show. Its a show I’ve habitually returned to over the years, despite being a person who almost never rewatches shows.

From the very first scene (“he who conquers the left side conquers the world, Chief”), I got the sense that this would be a new favorite show of mine. The show immediately and deftly works together a small-town, slice of life atmosphere while simultaneously setting itself up as a cheeky, never-serious and over-the-top series. The series somehow manages to have both deep, complex characters and a wild, unpredictable chain of events. 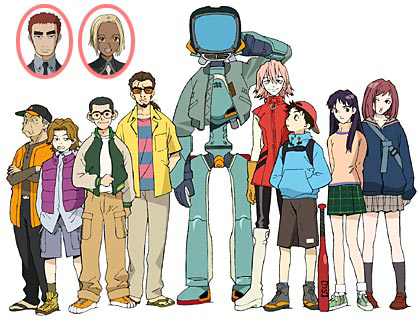 “Nothing amazing happens here. Everything is ordinary.” These small moments of calm and reflection (in that case as the camera pans upwards past a massive building in the shape of a clothing iron), are tucked neatly into Japanese anime industry in-jokes, raucous action sequences, and the dramatic shifts in style. The moments of quiet, though, are the real reason this show is my favorite. A second where Naota lays on his bed and listens to a plane fly over, the school announcements coming on in the background of students talking, or a long, tense moment of silence after a yelled outburst. This show is a master of capturing “real” moments of everyday life, and I find it difficult to think of other shows that have the same level of detail.

The show was produced by the FLCL Production Committee, a supergroup of sorts from the anime industry. The director, Kazuya Tsurumaki, said in an interview that with FLCL he tried to “break the rules” of an anime show. One way to do this was to mimic a promotional or commercial style, creating a slapdash, short but densely packed series of episodes. Another fairly unique production choice was to bring in a Japanese alternative rock back, The Pillows, for the soundtrack.

FLCL has earned widespread acclaim, and several reviews really resonated with my own feelings of the show. “FLCL is something that allowed those involved to try a wide variety of styles and techniques and does come off as quite experimental. But nearly everything worked in their favor and you end up with three hours of nearly break neck speed action, comedy and commentary on modern life.” says Chris Beveridge of Mania (quote from Wikipedia as the original website seems to be lost).

One of the more comprehensive and well-written reviews comes from IGN, where Davis Smith writes, “Logic dictates that FLCL should be an undisciplined and unaffecting mess, given all the insanity that its creators are attempting to weld into a functioning whole. Yet while it’s hard to explain exactly why, it works. It entertains me. At times, it makes me laugh; at times, it makes me a little misty-eyed; at times, it makes me want to scream and howl and light things on fire and break windows with baseball bats and yes, maybe even buy a Vespa. That’s the kind of success that you just can’t argue with.”

One of my favorite characters is the robot, who is known by a variety of names, like “TV Boy” by Naota’s father, or Cantido, the Lord of the Black Flames by Mamimi. I love how this character is just deeply unknowable. Most often referred to as Canti, he becomes a critically important character in the plot, but as that happens he’s used for a variety of tasks by the rest of the characters – from retrieving drinks and adult magazines to recording TV shows, to playing baseball or becoming a powerful host for characters in mecha combat. Canti is a robot who’s been anthropomorphized, feeling shame at having the back of his head cracked, mysteriously eating curry, or displaying compassion and kindness even to those who try to destroy him.

Now, 16 years later from the original 2000-2001 production of the show, FLCL will have seasons 2 and 3 released in late 2017-2018. I was blown away when first hearing about that, and I’m happy to learn more details about the new seasons, especially the fact that The Pillows will once again be providing the soundtrack. I will have to make an effort not to raise my expectations too high, but a return to the world of FLCL is certainly a trip to look forwards to.

Note: The intention behind this post is to start a series within my blog, where I focus on the history of the local area, in this case the East Bay Area in California. My former blog had a few posts in this category, and I really enjoyed learning and writing about this subject. They won’t be all too frequent, but look for more posts of this type in the future.

Buffalo Bill’s Brewery has been a staple of downtown Hayward since it was founded by Bill Owens in 1983. The year prior to Bill’s opening, California finally changed a state law prohibiting businesses from brewing and selling beer on the same premises. Therefore, Bill’s became one of the very first brewpubs to begin operating in the nation, standing at the very origins of the craft brew movement. The first beer offered by Bill’s outside of their brewpub location is the Alimony Ale – supposedly created for a client going through a divorce in 1987.  In addition to this, Buffalo Bill’s is also credited with creating the very first commercial available pumpkin ale (the linked article is a fascinating read about both pumpkin ales and the position pumpkins have had in American culture).

After first getting a job by cleaning out tanks for free, the current owner of Buffalo Bills is Geoff Harries purchased the brewpub in 1994. Since then, he has expanded the offering and reach of Buffalo Bill’s, and has recently been working on opening a Hayward distillery, called the Russell City Distillery. According to the Mercury News, Russell City is a reference to a town west of Hayward, a blue-collar town sitting right on the bayshore, which was annexed by Hayward in the 60s and out past the Hayward Executive Airport. The latest news from Russell City Distillery is that a larger sill is being installed, and that hopes are that production begins later this summer.

I’ve realized that I’ve effectively put off writing blog posts on here for practically a year. What started a summer ago, with the intent to take the summer to get it up and going, stayed behind in the summer. Being a teacher, it became easy to push this particular project back and back, until finally I look up and its the end of the year and the dawn of a new summer.

So, after taking things into stock, I’ll brush off the dust and try it again. This last year (by which I indicate the school year) was really a rough one – with triumphs and challenges and wonderful moments among the rotten ones. I have gotten the sense that every year as a high school teacher is going to feel like simultaneously the best job and the worst job, but never without a sense of being right there in the trenches.

The year is over, however, and I’ve now got three years of teaching experience, and a hopefully soon-to-be-processed clear credential. I attended a week-long PD (professional development) after the school year was over, and worked and thought a lot about how I’m going to continue to get better doing this thing. I’m not even out of June of summer break and already I’m thinking about the next year on a daily basis.

That said, I also have an incredible amount of plans in the works for this summer. Writing fairly regularly to this blog is one of those plans.